... and the area is home to wonderful native vegitation

You can see the age of the facility reflected in some of the panels in the control room
where hard working and dedicated astronomers work tirelessly like robots
in their quest to uncover the mysteries of the universe.

This telescope is home to arguably the most complicated astronomical instrument ever built,
the 2 Degree Field (2DF).

This instrument can take the spectrum of 2000 objects in one night and was a revolution in astronomy.
It allowed the first large scale surveys of the universe by collecting spectra from hundreds of thousands of galaxies.
The 2DF can do this because its robotic positioner places hundreds of tiny prisms at the end of
optical fibres (shown above) in the correct position to simultaneously collect light from hundreds of galaxies. 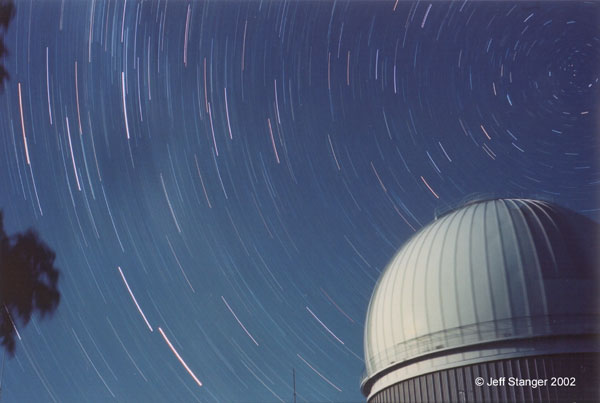 Despite it age this telescope has been at the frontier of science throughout its life because
of the amazing work of the scientists that build and upgrade its instruments like the 2DF.

From the AAT you can see many of the other telescopes on the mountain.

These include the ANU's 2.3m Advanced Technology Telescope (ATT)

One interesting feature of this telescope is that the whole building rotates with the telescope.

From the AAT you can also see the UK Schmidt 1.2m which has been responsible for many surveys of the southern sky
and it is the sister instrument to the Oschin Schmidt Telescope on Palomar Mountain in California. The wide
angle images from these telescopes are now used in Google Sky to give you real images of the whole sky.

Next to the UK Schmidt is the 2m Faulkes Telescope South in its cool clam shell dome.

This telescope was built to be used by school children and professionals.

Looking down the light path of this wonderful instrument.

On the back end you can see the CCD's, a spectrograph, computers and even a laptop held on with electrical tape.