Astrophotography is as much art as it is a science when practiced by the humble amateur. If you are like me and your Astronomy runs on a small budget, then a few hundred dollars is all that is needed to get you on your way to what I find to be a hobby requiring much patience and persistence, but eventually gives a great amount of satisfaction.

The basic equipment needed for your first steps into the world of astrophotography is a SLR (single lens reflex) camera, a tripod and a cable release. You don't necessarily have to buy all this; my first attempts were on a friends equipment. If you are not fortunate, as I was to be able to borrow, you can pick up the necessary equipment for a few hundred dollars second hand.

Your camera has to have a few basic requirements. It must have a B setting (on the shutter speed control) for long exposures and also accommodate a cable release. This will allow you to hold open the shutter for the desired times. It is also a good idea to have a camera has a fully mechanical shutter rather than electronic, as batteries can be expensive and some don't work well in the cold.

My camera and that of many other astrophotographers is an Olympus OM-1 which is excellent for this and more advanced methods as you progress. Some of the other features to look for if you wish to buy a camera for use in all types of astrophotography are, mirror lock-up, interchangeable focusing screens and the availability of magnifying eyepiece attachments.

Your tripod needs to be sturdy, but even the flimsiest of tripods can be sturdied with the use of a heavy object such as a brick. This is important on a windy night because a flimsy tripod will vibrate in a strong breeze and blur your photos.

A cable release has to be lockable, to hold the shutter open for long exposures and a good one is not that expensive but can be hard to find.

For astrophotography in humid conditions, a dew cap is a helpful addition to your arsenal, allowing you to produce clearer, sharper results by eliminating fogging. You can make these yourself without too much trouble from pipe, plastic sheet, or even cardboard. Make sure that you don't obstruct your field of view and colouring the inside black will help to cut down the amount of stray light entering your lens.

The two main types of photos you can now attempt are the star trails and basic still pictures of the constellations.

Star trails can be very attractive and are caused by the earth's rotation on its axis, making the stars appear to move across your photograph in arcs. These can be anywhere from an exposure of 1 minute to almost 12 hours and capturing them is simple. The most popular of these pictures is of the North and South celestial poles, showing clearly the Earth's rotation on its axis and the stars in the polar region.

The film that is required for these photos is film with an ASA rating of about 50 or greater. The higher the rating the more stars you will record on your film and the shorter your exposure can be to achieve the desired effect.

ASA 50 to 200 films need exposures of at least 30 minutes whereas 400 ASA will give you star trails after a few minutes. Films I have found to be good are Konica 400, Fuji 400 and Agfa professional films, but unlike many I have not used slide films due to the cost involved.

For very long exposures you need a relatively slow film so as to not over expose or get too much sky fog, which is what you get when background light such as street lights get recorded on your photo. This causes a wash out of the detail you have recorded. This is especially a problem when close to a town or city on a moist night, the water in the air tends to scatter the stray light in the atmosphere and makes this problem worse.

It is best to practice astrophotography at a dark site but if you are in a light polluted area, then keep your exposure as short as possible and take your pictures as close to directly overhead as possible.

Set your camera to B on your shutter speed control, set the focus at infinity and have your lens aperture stopped down one f-stop from wide open, this minimizes the stretching of star images at the edge of the field by irregularities in your lens near the edges. Be sure to record the details of your exposures, such as date, time, object, lens & film. This will save a lot of pain later when trying to identify your exposures.

The trick to a good star trail is to include an interesting foreground feature such as trees, mountains, buildings, etc. This makes for very attractive photo's and gives the picture perspective and depth.

A more sophisticated example of star trails is achieved by taking an exposure of an hour or more and every ten minutes or so, defocusing slightly. This will cause your star trails to fan out in steps, highlighting the true colours of the stars.

The second type of photograph you might like to try is still pictures of the constellations, the Milky Way, or the Magellanic Clouds. There are two general rules and a formula to be used for these. The general rules are if you double your film speed or ASA rating, you approximately halve your exposure time and if you open your lens one f-stop, you approximately double your exposure. These may help you choosing film, f-stops and exposure times. They have also come in handy when trying a similar exposure to one you have done before on different films etc.

The formula for a 35mm format camera for determining the limiting time for your exposures before trailing occurs on your photograph is as follows:

T = time exposure in seconds.
F = focal length of your lens in mm.
D = declination of the object in question in degrees.

Film selection for these photos is a trade off between film speed and grain size. Popular print films are Kodak Ektar 1000 (now Royal Gold), Fuji 1600 and Konica 3200. Fuji 1600 is a good trade off but more advanced amateurs may like to try hypersensitised film, giving fast speed with finer grain.

Both of these types of photographs can be processed at your local photo lab (except for hypered film). Ask around for someone who has dealt with astrophotography before and you will have a better chance of them getting it right first time.

One way to save some money is to ask your photo lab to only develop your negatives. You can then choose which ones are worth printing. Don't be afraid to ask questions and tell them exactly what you want. You can get them to vary the sky colour in your prints to get the most out of the ones you like and you will be amazed at the difference between laboratories, once you find a good one you will be very happy.

Although some in the amateur ranks see astrophotography as some sort of disease, it has opened a door to a practical astronomy when a decent telescope is out of my reach.

Good luck and clear skies to all. 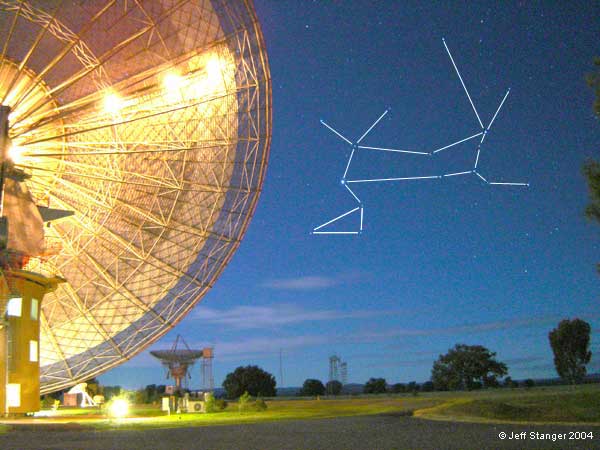 The constellation Canis Major (the big dog) next to the Parkes Radio Telescope.